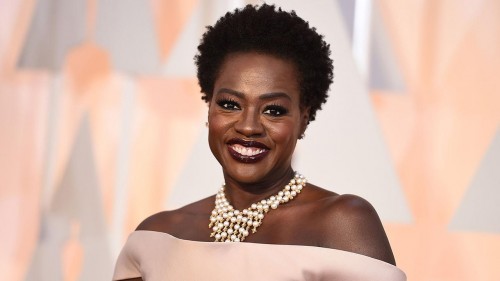 Viola Davis made history this year when she became the first Black woman to win an Emmy for Outstanding Lead Actress in a Drama Series. I could go on about the sad reality that here we are in the 21st century and such firsts are still being made for Black people…but we know that story. What I do want to discuss is the powerful representation and image that Viola Davis has become for the Black community as a whole and Black women in particular.

I think that it is important, especially for public personalities and celebrities of color, to struggle in the open with certain things (and of course in a certain way). Viola Davis has over the past few years brought her struggles into the open discussing her dark skin, her natural hair and the labels that are often thrust upon her regarding her beauty.

It is so poignant that Davis gives voice to this issue and not just that she gives voice to it but that the introspection behind it is introspective and pragmatic. Davis does not bring these issues to light in order to decry slavery and the bigotry against Black people that birthed it, she instead declares it as a personal journey to deal with an issue that is so embedded in the Black experience in America that it has become our issue to the point that we are both the victim and the victimizer. It is we, if only to ourselves, that are the oppressor when it comes to discussions about complexion and hair texture. And rightfully so. Because only we can describe what it feels like in that dark skin or that tightly curled hair. Politically correct White people and ignorant White people will quickly say how perfectly unblemished our midnight skin is or how beautiful our coarse hair is but for dark skinned and/or nappy haired Black people, inside something still churns from the knowing that we are not even close to America’s standard of beauty and that their own people will be the biggest reminder of that fact.

So often in the Black community we pour our energy into fighting against the people and systems that have scarred and oppressed us and we fail to take the time to deal with ourselves and those in our community. We take for granted the residual affects that those years have caused our community. Some of the deepest rooted issues that we still suffer from have to do with complexion and beauty. Those issues are passed, unspoken, through generations and they reside uniquely in each individual. Some may be fair skinned but its their hair texture that plagues them or some may be dark skinned and it’s their complexion that haunts them. These issues are a generational disease from our past that is hereditary and it finds its way into who we are individually and it attacks our individual identity. And that is where the battle must be fought. At this point it is already politically incorrect to say things like nappy or coarse in reference to Black hair and it’s politically incorrect to say darkie or gigaboo in reference to dark skin but those insecurities are still there because America has decided not to speak about it but has not truly changed its standards. And there are individuals who are living in that quandary: somewhere between believing what they are told and never being able to live up to the images that they are shown.

It’s the American way to say one thing and do the total opposite. In so many ways and on so many levels America has consistently pissed on its citizens and told them its raining. The problem is that we internalize both what we are told and what we feel and know to be happening. We want to believe the mainstream has changed in our favor. We want to believe we have progressed and gained all this ground. We want to believe that everyone is equal and we are all beautiful- because truthfully we are. But America has never believed that and still doesn’t.

Davis makes it clear that the choices that she is making are not about America or anyone else; they’re about her fighting her own demons. That is so significant because that is where we will achieve the greatest ground. Even when we no longer have a need to seek public opinion for the standards of our self esteem, we will still have to deal with ourselves. Because even the few tokens that the mainstream may “accept,” their beauty will always be qualified; they will always be ‘pretty, too.’

The struggle needs Viola Davis’ to come forward and tell their stories, give voice to their pain and speak their truth. She doesn’t call out one director or one studio; she instead uses her platform to stand before the mainstream and address her demographic of Black women and the Black community with encouragement while holding them completely accountable for the part that they play in perpetuating the problems. And while speaking to Black people she exposes the truth that there are groups of people that America has never called beautiful and may never meet the mainstream standards of beauty and those people had better learn to love themselves enough to accept themselves without apology because that is the most beautiful thing they can do.

Was it just last year that feminist trailblazing corporation, Apple, commissioned not one, but two women...

Redbook is getting real and decided to break away from the traditional celebrity cover model. The women’s...

The Rise of Misty Copeland: A Ballerina’s Tale

Misty Copeland is now the first African-American woman to be named a principal of American Ballet Theatre. Photo...